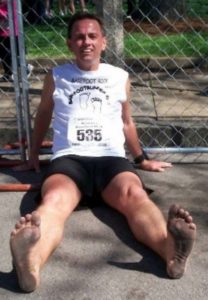 We were at WinGS (our Parish’s Scripture Study). I had just introduced Rick Roeber (the barefoot Marathon Runner who competes internationally to raise money for charity)…and then sat down in the front row. His discussion was fascinating and I was hanging onto every word. Until God dropped an image on my heart and I started eagerly sketching it out. It was very simple: a lowercase ‘h’ with the number ‘4’ … combined to form a very abstract capital ‘H’. At the time, I understood it to represent ‘hunger for Him.’

My friend came over for a rosary, bringing her 9 year old son. When we were finished praying, she asked me to show her son the symbol. I mentioned that I could envision it being silkscreened on shirts. He, a nine-year-old-boy, suggested we make it into jewelry. Like a leather cuff with metal cutout.

That sketch remained untouched for quite some time. Fast forward many years. A dear friend’s niece started adult dancing. As a teen. We prayed without ceasing for her life and soul. I learned at the time that there’s a very fine line between dancing, pornography and trafficking. She is now married and safely out of harm’s way, praise God.

We were driving to St.Louis shortly thereafter, late at night. God spoke to me. Something that rattled me to my core: “You have NO idea of WHO is in that truck!” Not WHAT. But WHO. I still shudder, thinking about that revelation.

Then again, fast forward several more months. I was in a small group study with a sweet sweet Mama. Her daughter was being repeatedly abused!! She was being subjected to horrendous acts by a birth relative and his perverted friends. Every. Friday. Night!!

It was somewhere along this time that God brought that symbol back to me, and cracked open the larger meaning. Hunger for “Him. Heaven. Humanity. Hope. Healing. Help. Home. HER.”  And with that revelation, the bridge between the symbol and the eradication of Human Trafficking was built.

Somewhere in the mix of all this, I started voraciously reading anything about Human Trafficking. Stats. Rescue Success Stories. Personal Survival Bios. Anything I could get my hands on. I prayed a prayer of protection over my heart, soul and mind, and dug in. Repeatedly.